The last time I posted...

Was two years ago?

Sorry folks. It's been a bit tough finding the time to bake and document said baking with all the trials and tribulations over the last two years. But I hope to change that now that I'm living a bit more comfortably and without bug infestations and a terrible soul-sucking job. I know. Excuses, excuses.

Anyway. A few weeks ago my friend and I decided to bake a Galette des Rois (King's Cake in English) for fun. It's actually a great little pastry to make that has some very simple steps. Although, there are many of these simple steps, which made it a little complicated in the kitchen. So complicated, in fact that I got a bit distracted and forgot to take a full set of photos. Oops.

So, what is a Galette des Rois? Essentially it's a layer of frangipane (a sweet almond paste with bits of almond still visible... at least when I make it) covered with puff pastry and baked. Yum.

What's more interesting about it for my non-religious self is that it's a religiously themed pastry taking its name from the biblical three kings. It's baked to celebrate Epiphany (January 6th). Also known as the twelfth night of Christmas (Yep. Think of the song.). Or, in Catholic liturgy, the magi coming to visit Jesus as an infant (Sorry, I refuse to say The Baby Jesus in my prose or verbally because it's just silly).

The tradition goes: when you make this French confection, you are supposed place a trinket inside the pastry before you bake it. This can be a plastic baby symbolizing Jesus (putting plastic in the oven sorta wigs me out), a porcelain "bean," or in my case an actual dried Lima bean since I didn't have either of the other items). The person who gets the piece of the cake with the trinket gets to be king or queen for the day, which comes with a whole host of obvious privileges.

Well, we ate this delicious cake? hot out of the oven (slightly cooled so we didn't burn our faces off) and my friend fittingly got the slice with the bean, effectively making him king for the rest of the evening. Which really isn't that much different than the norm.

The name of the cookbook where we got the recipe is called Homemade Winter: http://www.amazon.com/Home-Made-Winter-Yvette-Boven/dp/161769004X

My icing: Religious to Damn - Sunset
Posted by Thrifty Sifter at 4:27 PM 1 comment:

In 2010 Ali - author of the Yum Veggie Burger review blog - threw her second annual Pie Party. Last year's was a major success, so there was no question that this one would be even better.

After keeping it super sweet during 2009's party with my Peanut Butter Banana Cream Pie, I decided to move more to the savory side with a Pear-Cranberry Pie, compliments of Cooking Light's website. The recipe calls for a packaged pastry shell for the crust, but I decided to go all out and make my own pie crust from scratch. To do this, I used one of David Lebovitz's (my fav) recipes which, although it was time consuming, came out really well.

Let me just make a quick aside here, my love for this recipe was so big, that I endeavored to make this for Thanksgiving dinner at Jeremy's mom's house... the first time I met her. Thankfully, it was also a hit there (though it wasn't better than Jeremy's Mince Pie)!

Since I didn't really make an adaptations to these recipes (and to respect David Lebovitz's recipe copyright, I won't list all the steps, but will, instead, take a photo-journalistic look at my baking experience. Enjoy! 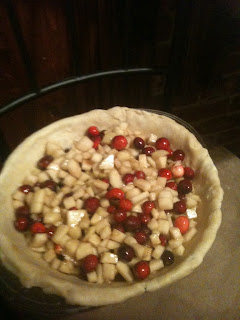 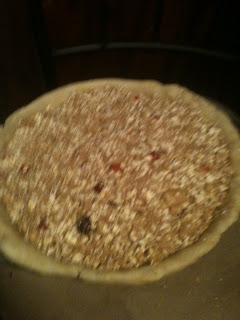 
Icing: The Hundred in the Hands - Pigeons
Posted by Thrifty Sifter at 9:30 PM 1 comment:

It's been almost 3 months since I last posted, which mainly means that I'm busy and lazy. But, please don't think that I've given up the baking, because that's not true.

Over the past 3 months I've:
1)  Made an Apple Gallette
2)  Ate at Katz's Deli with one of my best friends
3) Watched the Battle of the Bars in Astoria (field day)
4) Was a bridesmaid
5) Bought Tricky a bed (which he loves)
6) Saw Eels live at Terminal 5
7) Went to a bridal shower
8) Made Chocolate Stout Cake
9) Made Baked Apples
10) Danced with Jeremy Cooks Dinner (best dance ever) at LKS's wedding
11) Made Popovers
12) Demolished a fish
12) Had my first anniversary with Jeremy
13) Made two failed dishes: Veggie Chips and Lemon Bars
14) Learned how to Bake Bread at Home at the CIA

WHEW, that's a lot. And here's a picture montage of some of the above-mentioned events. Enjoy! (Also, I plan to bake a pie next weekend and promise to actually blog about it). :D 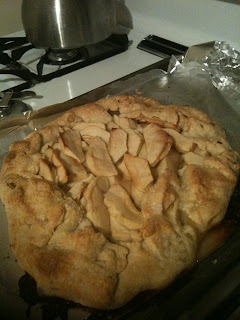 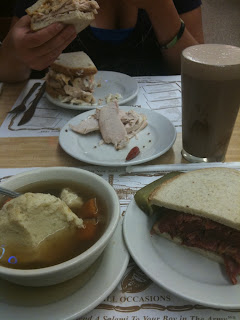 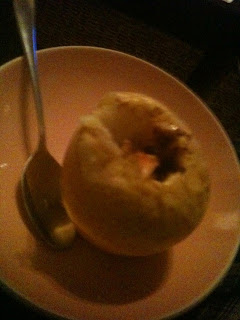 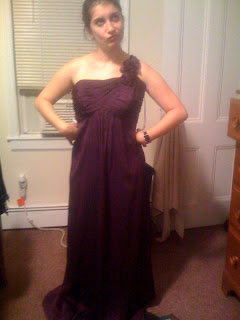 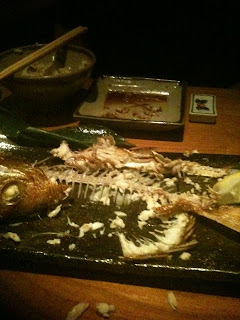 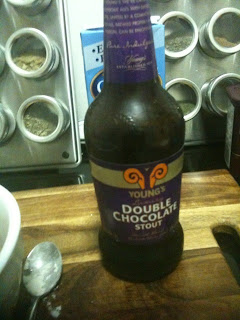 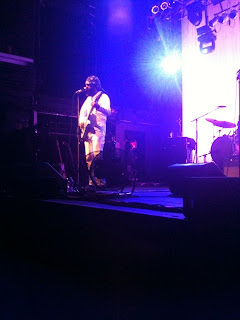 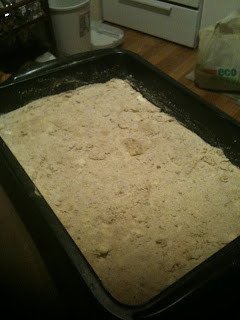 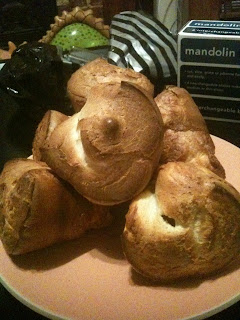 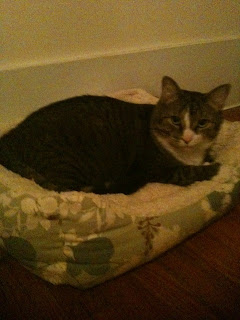 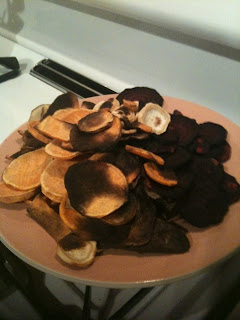 Back by popular demand.

Ok, I don't have a really good "but" (though Jeremy would argue that my butt is very nice), but I have a good recipe to share, which should hopefully make up for my tardiness in posting.

A few weeks back, Jeremy had a get-together at his place to test out "The Ingredient." Whilst the chili (I'm not sure why I have such a hard time remembering whether that word has one or two Ls...) was cooking, I decided to make some baked treats for the hungry guests waiting in the living room. Jeremy had requested his favorite type of cookie be made: the chocolate chocolate chip. And, so, I happily obliged. How could I resist an opportunity to partake in one of my favorite activities and test it on a bunch of friends?

Anyway, I used a recipe I found on Epicurious.com that was actually meant for chocolate mocha sandwich cookies. That seemed like a lot of work for some quick baking, so I just decided to make the cookie part.


So, with all the above in mind, I set out to make these chocolatey cookies. And, let me tell you, they were a hit. Made me feel all warm and gooey inside, all analogy intended. Unfortunately, I didn't have the time or space or camera to really capture all this on film at the time.

BUT! But, but, but! But, Jeremy asked me to make these cookies again last night after we cooked some delicious pasta - which I believe he will post about soon - and watched Kick-Ass. And so, I did!

Everyone loves a good picture. Or five.

I've been playing around with the idea of customizable food in my brain (BRAINS!) and already found a few already-implemented business ideas to observe.

The first I found on the intertubes via some links in my Daily Candy NYC newsletter (I think). It drove me to this: Chocri

And it's not just normal old chocolate ideas. They have things like dried apples and bananas to coriander and chives to nuts, gummy bears, and "rice crispies." You can choose any type of chocolate (milk, dark, white, and a mix of milk and white). And voila! You have your own chocolate bar. It's a little pricey ($6.50 for the base 3.5 oz chocolate bar plus toppings), but what do you expect for customizable chocolate bars! YUMMMM.

The second thing I came across was while I was watching a new show on Food Network called "Kid in a Candy Store," which is essentially the televised travels of a really lucky guy who gets to go to all the unique dessert locales in the country, and came across the most genius idea: customizable ice cream.

Using science, they allow you to make your own types of ice cream based on their flavors, mix-ins, and even food coloring options. They make it all right in front of you with an every-day standing mixer and a blast of nitrogen. On cold days - hey, it IS Chicago - they you can also make your flavor of pudding that they boil on the spot with an espresso machine milk steamer. Pretty awesome, no?

And, I just found out from an awesome friend that there is a place in NYC that also does this called Lulu and Mooky's: http://www.yelp.com/biz/lulu-and-mookys-liquid-nitrogen-ice-cream-new-york

I have to do what?

After a 2 week hiatus from baking due to packing and vacation in the Land of Awesome with Jeremy Cooks Dinner (aka Mr. Boyfriend), I am back and better than ever.

As I mentioned a bunch of entries ago, my mom got me a new baking book called Ready for Dessert the title of which I am in full agreement with (ooooooh, I ended a sentence with a preposition).
Once I had unpacked and done my laundry, I decided to crack it open and see what kinds of fancy cookies I could make in a small amount of time with the smallest number of un-purchased ingredients.
Twees?
Twills?
I have no idea how to pronounce this.
Sesame-Orange Almond Tuiles
Requires:
- Butter, check
- Sesame oil, check
- Freshly squeezed orange juice, ugh
- Zest of an orange, ok
- Sugar, check
- Flour, check
- Sliced almonds, fine, fine
- Sesame seeds, got them!
Ok, so that's not so bad. I only need to purchase an orange and sliced almonds (because I'm certainly not going to attempt slicing the whole almonds I already own). So, I go off to the store and pick up the necessaries after purchasing some sushi noms for dinner.
Post fishes, onto baking! 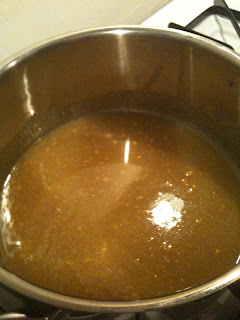 First I mix the first five ingredients in a pan over low heat until melted. Easy enough. 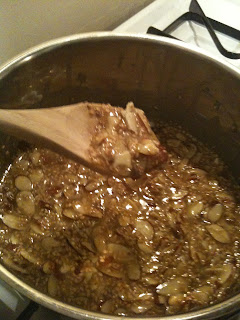 Then I stir in the dry stuff and let the batter rest for an hour on the counter (and watched my DVR-ed episode of True Blood.)
Post True Blood... 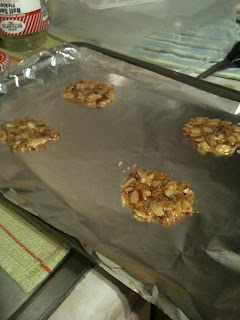 Baking is always easy! Just put it in the oven!
And take it out after said designated time (or when it looks done because my oven is a nutball).
P.S. I was really unsure if I had done this cookie drop correctly. The recipe said only 4 cookies per tray and this thing makes 20 cookies. It's a good thing I believed the recipe and didn't go with my gut 'cause... 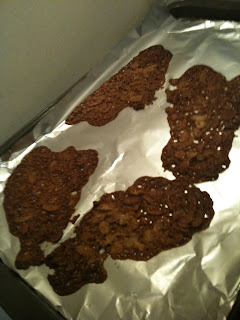 Yeah, that's what they looked like after 8 minutes in the oven.
Slightly unexpected.
Well, that wasn't so bad. I did burn myself rotating the pans in the oven, but whatever. Comes with the territory.
Let's see, what's next...
Uh.
I have to do what?
Right.
...
I have to remove the cookies from the burning hot pan that I already singed my wrist on and place them over a rolling pin to cool?
And, if they don't start to mold, I have to put them back in the oven and start the burning-myself process all over again?
????????????????????????
??
?
Awesome. 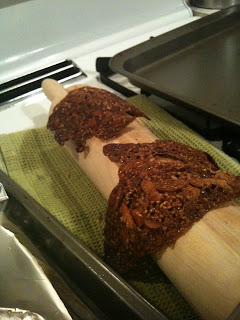 Overall, the cookies came out well and looked pretty much like the photos in the cookbook, though I think they were on the large side. Next time I won't flatten them out so much. 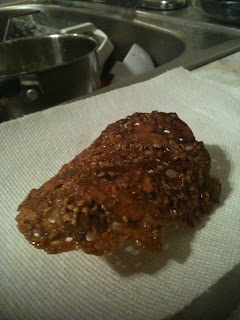 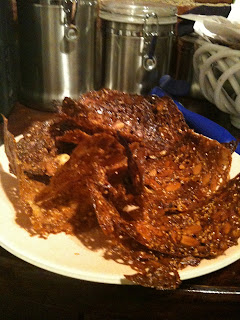 Mr. Boyfriend really enjoyed them.
And so did Arthur. 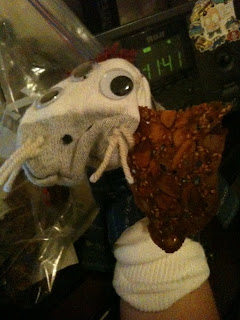 I promise there's one coming!

Sorry for the 2 weeks off! I was preparing for my trip to the Grand Canyon with Jeremy Cooks Dinner and then spent a week in AZ and UT gallivanting around canyons and hiking and whatnot.

I did bake on Sunday and have pictures and narrative to post! Hopefully tonight.

Catch ya later!
Posted by Thrifty Sifter at 10:44 AM No comments: